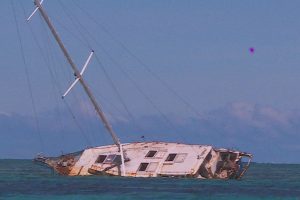 WARNING: the AVP does not support in any way these wrecks of abandoned sailboats, on the contrary, and does not seek to exonerate their owners (most often residents and not "foreigners passing through" who abandon their boat); the fact of leaving one's sailboat abandoned and letting other people worry about it is an irresponsible and unacceptable act

At the AVP, the debate has been invited lately on whether or not to put these three articles online, which clearly do not make a good advertisement for yachting in Polynesia. And yet, it seems that we have to talk about it.

As we know, currently, "bashing boaters" is a fashionable pastime. So yes, to be indignant about these two cases of wrecks is normal and everybody is obviously in agreement on the subject ... but why then "to shoot in the dark" on the whole of the yachting industry when it concerns only some very particular cases?

Oh yes ... of course ... these wrecks are visible to everyone!

But what about the numerous car wrecks in the valleys, sometimes even covered with vegetation because they have been there for so long?

We see them much less than the sailboats, it is true ... so it is so much easier to forget them. We don't see them, so everything is fine. So, from there to imagine that they can pollute ... impossible!

Don't tell me that there are no more batteries, no more oil, no more fuel, no more toxicity in these cars... I will snicker softly.

Do we have to explain again the possible pollution, far from being negligible, of these cars that will reach the ground, then the water table and then inevitably the lagoon?

"[...] has been threatening the surrounding marine biodiversity for three months. "

These excerpts from an article seem to me quite appropriate for the problem of car wrecks on the valley floor too, don't they? Whether the biodiversity is marine or terrestrial, we must protect it.

Obviously, we have to manage these wrecks, but please, take the problem as a whole: whether it is a "sailboat" or a "car" wreck, the root of the problem is ecological and affects all citizens. It is not the trial of boating that must be done, but the trial of individual incivilities. As this article from February 2018 reminds us, with in particular the interview of the President of the AVP on this subject at the bottom of the article.
In addition, it should also be remembered that the vast majority of sailboats are in good condition and are most often insured by their owners.

For the sake of completeness, it is necessary to point out the initiatives of some municipalities and even of the Territory, to tackle the problem of these carcasses, especially from 2014 to 2016. Nevertheless, there is still a lot of work to be done ... and not much is missing to make it possible for the wrecks of sailboats.
Article Polynésiela1ère - Articles Tahiti Infos 1 and 2 - Article LaDépêche

This is why projects such as "L'atelier'Ecup du Fenua", whose initiative is to remove wrecks on land and sea at a lower cost, must be supported and helped by the Territory, by associations such as the AVP, by the communes, ... It is up to each one to make their own eco-responsible decisions.

Already in 2019, the AVP had made a file on the possible management of these wrecks.

The AVP has been asking for years for the implementation of a "Cruising permit" (a tax), which would allow the financing of this "depollution" in part. It is time for the government to set up this tax in order to be able to activate the financial means ... as apparently the legal side is solved because they seem to be able to deprive the ownership of a ship in one month.

the little hummingbird of the AVP