AND WHAT ABOUT COMMON SENSE ?
PGEM vs. State of Health Emergency : lucid indignation. 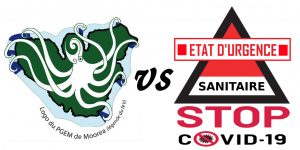 This new confinement in French Polynesia (but is it really a confinement when we see that the only reason for a waiver certificate of displacement that is not listed is: "to go and see the buddies"!) has inevitably had its share of nonsense.
About a week after the date of August 23, 2021 (entry in the confinement), the firstquestions raised by boaters, notably Anglo-Saxons, appeared on the social networks: around Moorea, the Municipal Police asked them to move their sailboat because of the 48 hours limit in authorized anchorage on sand as mandated by the PGEM. 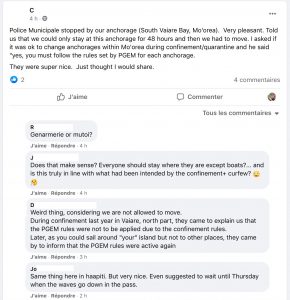 However, during the previous containment of 2019, around Moorea, the Municipal Police had indeed come to see the sailboats at anchor to inform them that the PGEM was suspended and that the containment, as an exceptional measure, prevailed. It was then compulsory to stay on anchor and not to move ("We tolerate that you splash around your sailboat." ... different confinement, different rules).
How is the current situation different?
Why should sailboats in Moorea be allowed to move around the island while the population is confined? I don't even specify "land population", as if the two had to be differentiated in a Manichean vision. Intolerable and inconceivable.
Because until proven otherwise, sailors are indeed part of the wider population of French Polynesia, so it would seem that they are subject to confinement, no?

Of course, civic-mindedness and common sense are everyone's business. Some sailboats also move of their own free will. Were a boater decide to move despite the prohibition, it may be his choice, but he knows he may be liable to a fine or worse . On the other hand, the fact that an authority, even a local one, forces them to move during the confinement is a matter of concern.

The administrative process to get an answer from the competent authorities has confirmed what common sense would suggest. The Adviser for the action of the State at sea (Part of the command of the maritime zones of French Polynesia and Pacific Ocean) as well as the Administrator of the maritime affairs and Deputy to the head of the service of the maritime affairs of Polynesia clearly answered me NO to the movements around Moorea, confirming this would be contrary to the rules of confinement.

Therefore, what to think of the decision of the Moorea's Township ?
The mayor of Moorea, whose vision of the world has become even more elegant, perhaps did not understand the statutes of a confinement or maybe he had other ideas in mind. This man has the merit of constancy in any case.
My investigation did not stop there because when I contacted the Polynesian Directorate of Maritime Affairs, I was told that I could not be given an answer for the moment because the Director had made a request to the High Commission to know if the State of Emergency took precedence over the PGEM!
In other words, the DPAM does not know if the PGEM of the small township of Moorea is less important than a State of Health Emergency decreed by the French State?
It seems obvious to me that any citizen is able to question this logic, isn't it?

Each one, according to his look at life, is free to judge this action of the Commune of Moorea. Some may applaud, others may be indignant, many may not care.
It is easy to imagine the reaction of the residents living by the sea or on high ground, seeing sailboats moving in the lagoon or around Moorea. They are confined but not the boaters? Do they know, for one moment, that many of these boaters were "forced" to move?

That's all it takes for dozens of "public prosecutors on social networks" to pour out their usual poetry on the "sailors". But here again, the debate is unfortunately distorted. And it will not be necessary to wait for an official and public denial of the State towards the Mayor of Moorea.
The damage will have been done. Let us dare to believe that it was not a deliberate maneuver of this Mayor.

"Because, in the end, the major risk is that everything ends up being the same, that the amalgam prevails and that the confusion overwhelms the minds. Short-sighted politicians are only waiting for that, to blur our disgust, to smooth our resistances; let's not make them this offer and let's be discriminating for once.
Lucid indignation is the surest defence. *

a sailor who is fed up