Home ActualitésPGEM 2021 : Another strongly negative message to the cruising community in FP

During the worst economic crisis faced by the tourism industry in French Polynesia, another island (Mo'orea) is turning her back on this most resilient form of tourism : international cruising.

Lack of boating infrastructure in Polynesia

The answer from the French Polynesian government to this problem is to update the PGEM (Lagoon Management Plan) with the closure of several anchorages and a drastic reduction of capacity   for other anchorages, and implementing a preposterous “quota system" limiting  the total number ofboats across the 10 official anchoring zones in the Moorea lagoon to a ridiculously low 30

The other 20 other anchoring spots in Cook’s Bay and Opunohu Bay are reserved for long term anchoring, and will likely be occupied by Mo'orea residents who cannot get a spot in a marina.

Only 2 to 3 anchoring spots are potentially open to all  sailors travelling from Tahiti, since only the East coast of Moorea is accessible, and only for  stays shorter than 48 hours, assuming these spots are not occupied by the residents of  M oorea’s marina.

The restrictions on freedom  continue   to grow.

Over the past several years, everyone agrees that a boating infrastructure capable of properly welcoming, hosting and organizing local and international cruising is seriously lacking in French Polynesia.

The slight increase of new cruisers  in the past few years, but more importantly the  unprecedented COVID pandemic  and the closure of  maritime borders worldwide  forced many cruisers to extend their stay in French Polynesia.

In 2014, the local government decided in favor of developing the cruising industry in French Polynesia, by extending the temporary admission from 24 months to 36 months, with the goal of developing infrastructure to further boost the thriving local  yachting industry.

Six years later, having  failed to create new infrastructure, the government  took a step backwards and reduced their initial ambitions by resetting the temporary admission period  to 24 months, hoping to reduce the flow of international boats.

In 2021, there is  absolutely no new boating infrastructure, and  no projects in the works. In contrast, the government has strengthened the policies meant  to reduce  the number of anchorages.

The new policy is an about face, aimed at reducing the number of boats, and increasing  restrictions by closing anchorages one after the other.

Indeed, a large number of restrictions  have been voted into law and more are set to  be passed  to further restrict the capacity to welcome international yachts and to penalize the local boaters by preventing them from accessing the lagoon.

-       Marina Taina Anchorage closed/closing
-       Reduction of the number of boats allowed at anchor in Moorea lagoon to only  30 boats and 10 of those for a maximum duration of 48 hours
-       Closing of the western portion of Fakarava lagoon in the Tuamotus
-       Reduction of capacity in Huahine by creating limited anchoring zones, soon to be voted upon. 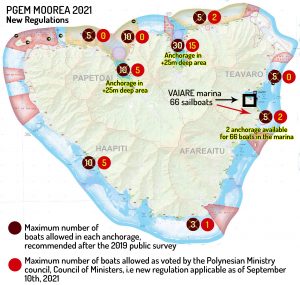 There is a clear intention  to concentrate all boats in the northern part of the island, in both Opunohu bay and especially Cook’s bay, that don't  really offer any protection, due to significant depths (25m/80ft) and strong winds caused  by the Venturi effect of the tall surrounding mountains.

Anchoring in these areas doesn't offer much   safety to  boaters with less than 80m of chain to anchor safely  in this type of anchoring situation.

Anchorage in Vaiare: quota of 2 boats with a nearby 66 slip marina

Another reason which makes this decision ludicrous is  that it doesn't take into consideration  the 60+ boats in Vaiare marina on the East coast.

The primary usage of most of these boats is to go out to  the nearby anchorages during weekends and holidays.

Creating a quota of 2 boats allowed to anchor at the closest anchorage for the local population   of 60 boats is absurdly  inadequate. . Furthermore, this will  strongly discourage all potential boaters from Tahiti from sailing  to Moorea for weekends or holidays.

Anchorage of Ta'ahiamanu: No sailboats are allowed to anchor there from now on.

The death of a young cruiser in 2020 has probably prompted this decision.
The response is inappropriate. It is against the wishes of the family of the deceased and it does not solve the problem of  mixed usage of this public space.

Anchorage nearby the underwater Tikis (Papetoai) : No anchoring allowed

Preventing access to these two iconic anchorages in Moorea is like removing the Eiffel tower from Paris : their reputation is famous both locally and internationally.

What is the justification for allowing only one single boat on a sandy anchoring area of one kilometer (0.5 nm) ?

The creation of a completely illogical quota system

The AVP (Association des Voiliers en Polynésie/ Polynesian Sailors Association),  which represents a large number of the lagoon users, has not been asked to share their opinion, or even represent cruisers interests,  in spite of their several requests  to meet with the authorities of the municipality of Moorea since 2017. Cruisers, who have the same access rights to the lagoon  as fishermen, local businesses and scientists, have deliberately been ignored to create this new PGEM.

The decision to implement a quota system has been made without considering several practical and technical elements specific to cruising boats, most  particularly their traveling speed.

To better understand the context, it is important to factor in the cruising time between anchorages.

A sailboat moves from one anchorage to another and NEVER stops in the middle of the ocean.Furthermore, the lagoon is the only place where a sailboat can find protection, as the local marina is perpetually full. 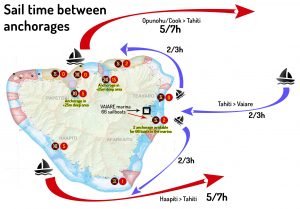 Taking into consideration these  logistical questions would have avoided the creation of such an impractical quota system:

1 - When a sailboat leaves Tahiti for Moorea, how can the skipper know if they will find a spot at their desired anchorage ?

2- Since a sailboat takes 3 to 5 hours to reach an anchorage, how can the skipper know if a spot available at departure time will not be occupied upon arrival ?

4 - How to know when  sailboats at anchor might leave to allow another sailboat to have a spot?

5 - Who can decide the legitimate status of “force majeure” for a sailboat  anchoring "illegally" in  an anchorage already at  its quota ?

6 - Who will take the responsibility, in such a case, to tell  a disabled sailboat owner (engine or other technical failure) to leave an anchorage, regardless of their ability to sail safely ?

7 - What will a cruiser be told when waiting in an anchorage due to a sudden weather change ?Who has the right to tell a sailor they must leave safe harbour, even if there is bad weather, if they have passed the 48 hour anchoring limit?
8 - Who will define the criteria of safe weather conditions  for   a cruiser to leave their anchorage, and consequently take the responsibility of possibly endangering the crew ?

A brief history of the evolution of the new PGEM  :

-       March 2019 : public survey regarding Moorea PGEM 2019 (Enquête publique en cours concernant le PGEM 2019 de Moorea).lready at that time the recommendation was to allow only 13 sailboats on Mo'orea's East coast (Maamaa valley in Teavaro = Sofitel ; Patae = by the marina and Champion store; Maatea). The outcome of the  public survey   to create the final PGEM was  a shock to all boaters, especially Moorea residents) but also s those from Tahiti and the international community, with the “quota by anchorage” concept to limit the number of sailboats.

These quotas are not at all in line  with the practical reality of accessing the Moorea lagoon and definitely not in sync  with the needs of the existing boating population.

-       February 2021 : first and only meeting between the  AVP and Moorea PGEM committee (rencontre entre l’AVP et les responsables du dossier PGEM de la Commune de Moorea) ;the AVP was told that anchoring in sandy areas all around Moorea would still be allowed for 48 hours.

The concept of the right to seek safe coastal shelter seems to remains acknowledged , but is now in conflict with the zoning and quotas.
Regarding Ta'ahiamanu, the committee confirmed that anchoring would be allowed, but with a quota of 0 boats. How should this information be interpreted ?

We deeply regret that nautical tourism in Polynesia will further suffer from negative publicity in the international cruising community.

Restrictions like these are increasingly negative actions towards local and international cruisers, who are already despised and stigmatised by some, even though cruising is the face of  sustainable tourism; at a human scale, eco-friendly and resilient, a sector of the tourist market which  contributes significantly  to the local economy (see Cruising tourism impact to the local polynesian economy [french]). We can only  report and express our disappointment with these decisions.

AVP (Association des Voiliers en Polynésie) has been working hard for several years to have constructive dialogue, and to propose reasonable choices which meet the needs and expectations of all cruisers, and for the best possible  management of the lagoon for all.

It is clear that despite all our efforts,  positive collaboration, including consulting the end users, is not the prime objective of the local leaders.

The AVP will continue to use all means at their disposal to stop this escalating situation, and will continue to broadly report the negative actions taken which deeply affect  the cruising community in Polynesia.