Home ActualitésNews in EnglishBoaters : The unloved ones of tourism in French Polynesia

SORRY IF THE TRANSLATION IS NOT ALWAYS GOOD, THE SUBJECT AND THE TEXT ARE COMPLEX.

Following the publication of an article in La Dépêche de Tahiti of October 4, 2021 and thanks to the kind authorization and transmission of the results of the study by Pierre Ghewy, we publish their analysis and thoughts on the subject, in agreement and partnership with the authors.

This study of the Polynesian population's awareness of yachting and boaters is the result of a collaborative effort with students of the Licence 3 Économie-Gestion of the University of French Polynesia (UPF). It was produced as part of their Market Studies course. To carry out the study, they wrote the problematic, the questionnaire, administered it and finally analyzed the collected data1.
In the years to come, this study could be repeated to establish a barometer and thus follow the evolution of the elements measured.

Boaters are tourists in their own right. They arrive from abroad, stay in French Polynesia and, like all "normal" tourists, those arriving by plane, they consume various products: local crafts, food, clothing, entertainment (leisure, restaurants, hotels, activities, air transport), maintenance of their sailboat, etc. A study by the Association des Voiliers de Polynésie (AVP) recently estimated that their contribution to the country is equivalent to 4.77 billion francs2 per year. However, they are insulted, threatened, assaulted (at least two injured in Huahine in 2021), their equipment is damaged (cut mooring lines3 or lacerated dinghies) 4 and one death5 , admittedly accidental, has already occurred.
The only difference with the traditional tourist, who arrives by plane, is that the yachtsman comes with his house and locates it where he wishes. What is the Polynesian resident's view of this particular tourist and what are the determinants? These are the questions that this work attempts to answer.

A first question asked seeks to determine the overall positioning of respondents with respect to boating 6.

Another question, "Do you wish they (boaters) would leave the lagoon?", receives a similar response: fairly neutral (mean: 4.24), but also with strong extremes: 12.3% of respondents are absolutely opposed to the idea of boaters leaving the lagoon while 20.5% absolutely want them to leave.

These initial results suggest that a minority of people who are strongly hostile to boating and boaters are leading the rest of the population to protest against sailboats.

"Polluters profiteering too much"

Other questions seek to identify more precisely the image that residents have of boaters in French Polynesia8 . This one is rather negative. They are mainly considered as "too many polluters". Again, the majority of respondents are rather neutral towards this image: 4.81 on a scale of 1 to 7. As with the previous measures, a minority (11%) adheres completely to this image.

The visual pollution of sailboats is often cited in the media and in social networks, yet, surprisingly, the fact of seeing or not seeing sailboats from one's home does not influence the image of the boater. Whether or not they see them all day long, respondents have the same view of sailboats. In fact, two elements influence the image of the boater : the respondent's archipelago of residence and his involvement in the environment.

Negative image of boaters according to location

Concerning the place of residence, in decreasing order, the most negative image is in the Tuamotus (5.82 on a scale of 1 to 7), the Marquesas, Leeward Islands and Moorea are almost equal (between 5.08 and 5.05 on a scale of 7). Tahiti, where the greatest concentration of sailboats is located, is only in fifth place (4.79). Boaters are the least disliked in the Austral Islands (4.04 - neutral position on the scale of 1 to 7). Thus, all the archipelagos, to different degrees, share this negative image of boaters. Does the behavior of boaters vary from one archipelago to another or is it the tolerance threshold of the residents that varies?

Involvement in the environment

Concerning the involvement in the environment, the second element influencing the image that Polynesian residents have of sailboats, the more the respondents feel concerned, the more negative the image they have of sailboats. This finding seems quite logical since pollution by wastewater discharge (dishes and toilets) is also blamed on boaters. This last point leads us to question the ranking of the elements likely to pollute the lagoon asked to the respondents. One question in the study consisted in asking the respondents to classify, according to their polluting power, the elements mentioned. The ranking of these elements, in decreasing order according to the number of times they are cited first, gives the following results :


Sailboats in good condition, those that float, finally rank only 6th in terms of polluting elements, after hotels, houses and poor treatment of wastewater from houses. Through their answers, the respondents indicate that they consider that their houses have a more polluting power than sailing boats.

This ranking of the elements polluting the lagoon is consistent with the results of the bathing water quality study published annually by the Ministry of Health 9 :

In spite of this information, the strongest opposition to yachting comes from those who think that sailboats, yachting infrastructures and wrecks of sailboats pollute the lagoon the most. If these people want to protect Polynesian lagoons by chasing away sailboats, they are obviously in the wrong business. But, as social psychologists demonstrate through theories of causal attribution, it can be easier to blame our actions on other people or external events, rather than taking responsibility for them.10

Too many and polluting ?

Among the attributes that have helped define the image of the boater, the strongest criticism leveled at them is that they are too numerous. Without mentioning the 36-month Route, the current upsurge of sailboats in the lagoon comes from the fact that, during the 2020 containment, the government of French Polynesia asked boaters to come to the Tahitian lagoon. This was to avoid the spread of the virus in the islands. As no infrastructure was put in place to welcome them, they were forced to "crowd" where they could...

The second strong attribute of the negative image of boaters among the population is that they are "polluters, responsible for the degradation of the lagoons (broken corals, waste water and motor oil discharges)". Concerning the corals, boaters do not put their anchor in the corals for pleasure. An anchor in the corals will be damaged, even blocked. It will then be necessary to dive to untie it or to lose it with its chain. The best and safest anchorage remains the sand. Concerning waste water. Yachtsmen are often blamed for polluting the lagoon with their organic waste (toilets, food scraps, etc.). Modern sailboats and some older ones are now equipped with black water tanks that allow them to discharge this wastewater outside the lagoon, in the open sea, or in marinas equipped for this recovery. This poses the problem of investment in the reception infrastructure. The respondents who most criticize sailboats for polluting are also the most opposed to investments to improve their reception and reduce these possible discharges11. The majority of boaters have made the investments to reduce this nuisance. This last argument, that of organic pollution, should lose its force when we know that, in normal periods, excluding Covid-19, only 26 sailboats are inhabited year-round at the Taina marina. How many motorboats are concentrated every weekend on the sandbar of the Tepuahono reef, near the Ta'apuna channel, to go on a binge... and without any toilets!

So, are boaters the unloved ones of tourism?
The above results show that all the criticisms made of them are not always justified or shared by the population as a whole. However, these criticisms are attributed to them and degrade their image. In two separate surveys, carried out by the same Bachelor 3 students, similar questions to describe the behavior of respondents towards tourists on the one hand and boaters on the other hand, describe different behaviors. The behavioral score for tourists was 6.12, compared to 5.42 for boaters. Again, the scale is 7 points. In both cases, the behavior is benevolent but the tourist is still rated higher than the boater.

Other questions were asked to evaluate the attitude not towards the person, tourist or boater, but towards the activity, tourism or boating. In this case, the opinions are clearer: +1.12 for tourism versus -1.30 for pleasure boating. These two measures are on a scale of -6 to +6.

The broader issue of tourism

One possible explanation for these differences may be that these two activities do not have the same visibility. Tourists, even if they are numerous, often stay in the hotels where they stay. These hotels are equipped for this purpose. They have enough to lodge them, of course, but also to feed and entertain them. Few tourists leave these structures. We sometimes see some of them in the back of the pick-up trucks that take them to visit Papenoo or other remarkable places of the country, but this remains marginal. As for the sailboats, they are in the lagoon, visible to everyone. They are a bit like those Airbnb tourists, more visible than hotel tourists. After spending the night in their accommodation, Airbnb tourists come out to meet the population. A study published in 2020 showed that the two indicators mentioned above, behavior towards tourists and attitude towards tourism, both tended to decline before the Covid-19 crisis. We were at about 240,000 tourists per year.

Another important numerical fact shows that the results of the explanatory analyses are particularly interesting since they indicate the real reasons for the rejection of boaters: the respondents reject the other (the boater) because he is not (culturally) like them and, economically, does not bring them anything. The environmental factor, often put forward to justify a negative attitude towards boating and boaters, is indeed noted as an element justifying this behavior, but it is weaker than culture and economy. The environment would therefore only be a pretext to hide other motivations. 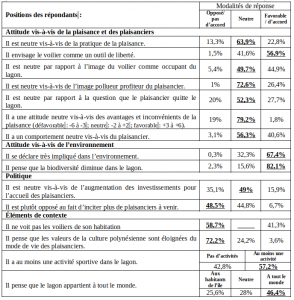 Concerning the last position of the respondent ("the lagoon belongs to everyone"), the analysis of the detail of the answers is interesting with regard to the current events around the PGEM of Moorea. 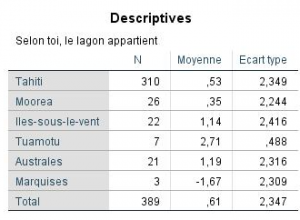 In decreasing order of lagoon sharing, the ranking is as follows: Tuamotu (average: 2.71); Austral Islands (my: 1.19); Leeward Islands (my: 1.14); Tahiti (my: 0.53) and Moorea (my: 0.35). The Marquesas Islands having no lagoon are not taken into account in this ranking.
The inhabitants of Moorea have the strongest feeling of belonging to their lagoon. They are, in all Polynesia, the ones who consider that the lagoon belongs above all to the inhabitants of the island and not to everybody. They do not want to share. Add to that Mr. Le Maire who feels obliged to follow what the population wants (article in the Dépêche of 11/10/2021), but he is, in fact, only following the wishes of a minority of people (on average around 15 - 20%) "extremists" with strong ideas about yachting ... and you get the PGEM 2021 in the process of being formalized.

In any case, it appears from this work that the respondents, residents of French Polynesia, distinguish the activity from the person. They reject the boating activity but, except for the exceptional cases mentioned in the introduction, not the boater. Not yet.