Home ActualitésNews in EnglishNew regulations for mooring in Huahine

[The end of the year is still like the past one! Another nice Christmas present, in the unfortunate line of the announced PGEM of Moorea] 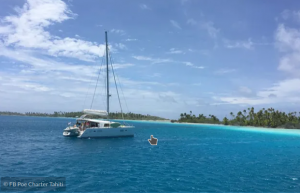 A decree of the Council of Ministers regulates the circulation and anchoring of ships in the Huahine lagoon. This text is based on the same principle as the regulation of Moorea, which is strongly contested.

After Moorea, it's Huahine's turn to restrict anchorages for boats. Anchoring and parking of vessels in the Huahine lagoon, whether they are engaged in recreational activities or tourist transport, will be regulated, the Council of Ministers announced. Medium and large vessels will have to moor in specific areas, which will be equipped with ecological moorings. Large ships (over 90 m) and cruise ships will have dedicated berths, positioned in specific areas, particularly in the Bourayne and Maroe bays, where the quality of the seabed will allow them to anchor in complete safety for the environment. The vessels will not be able to stay more than 72 hours on the same site. The communiqué of the Council of Ministers does not give any indication on the number of vessels that will be allowed to stay, nor on the organization of the occupation of these anchorages. Smaller vessels, less than 6 meters in length, will be able to continue to park in other areas of the lagoon except in the passes and channels. They will be invited to park in suitable places, away from the reefs and coral reefs. The duration of their mooring will be limited to 24 hours.