Home ActualitésNews in EnglishStigmatization of a community. What’s the point ?

The situation of the yachting in Polynesia is not necessarily good. Nothing new on that.

Far from focusing on its own navel and whining about its fate, the A.V.P. is reflecting on a subject unfortunately too present in our society. This subject is not specific to yachting, nor specific to French Polynesia; however, the stigmatization of a community seems to be quite prevalent here.

"Stigmatization is a process that, in the long run, marks the individual or group with opprobrium: the stigmatized are those who suffer social reprobation because they would have contravened a law or a social norm; they are seen as deviant." [1]

The words are there ... clear, strong, explicit. The words "suffer", "social reprobation", "contravened a law or a social norm", "deviant".

Stigmatization would be like a negative label that one sticks on a person or a community. It includes discrimination, prejudice, judgment and stereotypes, which allow people to be isolated on the basis of mere presumptions.

The industry in French Polynesia is a blatant example of this. You only have to see what can be said on social networks in particular, but also in a general way in people's comments.

Indeed, even without being especially "anti-sailors" or against boating, many people make generic assumptions about boaters, following what they would have heard or read, peddled by some unscrupulous media and the 15% of the population that are truly anti-boating[2]. They are "polluters", "profiteers", who "don't spend their money", who "illegally occupy the public domain", who "leave their sailboat to rot in the lagoons", ...

In fact, quite simply, people don't know! This way of life is not known, or even recognized as meeting the expectations of a "normally" constituted society. Therefore, boaters can only be "deviant". A similarity with the "Gitans" in metropolitan France is obviously conceivable.

How easy it is to stand behind your vini or computer screen and label people without knowing anything, or little, about their way of life. Hidden behind these screens, it is easy to feel strong and within one's rights to spit on any community. And above all, there is no need to think about why or how; it is enough to follow the hate movement influenced by a few self-proclaimed leaders of the good word and the certified opinion.

This is not unique to yachting. Just look at the flood of filth poured out there too on the adoption of fa'amu children in 2021. Two couples have indeed tried to abuse the situation; they should have been sanctioned and were. Two couples for how many serious, caring, respectful families whose adoptions in the fa'amu concept are going very well ? 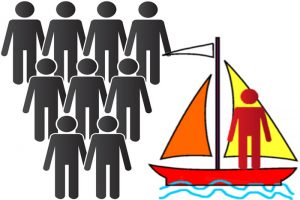 So yes, there are clearly boaters who do not do good publicity for their community, for sailboats in Polynesia in general. Yes, there are "black sheep" in the yachting world. The A.V.P. regrets it and does not support them, of course.

From there to "stigmatize" the whole community of boaters for cases, certainly existing and that must be reprimanded, but isolated? Yes, there are shameful behaviors, but they only concern a minority of boaters.

"There are black sheep in the police, colleagues who must be punished. But we can't lump 150,000 civil servants together" [3].

We are fed up with all these stigmatizations in a hurry, taking only the example of a few black sheep, of a few undesirable people in a group because of their behavior, to describe and label an entire community, an administration, a company, ...

We must stop with the generalization and see further than the end of our nose.

Before throwing out this kind of assertions that are not necessarily verified, we must also take stock of what we think ourselves. Because around us, there are inevitably "black sheep" who harm our profession, our sport activity, our community whatever it is ... Are we going to define a profession, an administration, a community according to the four assholes we have met?

Here is an illustration to show what should happen to those who use and abuse stigmatization.

Following the verdict in the Zemmour case (February 18, 2011), the polemicist at the time was convicted of provocation to racial hatred and found himself paying a fine following eminently offensive remarks about blacks and Arabs. Chems-Eddine Hafiz, a lawyer and vice-president of the French Council of the Muslim Faith at the time, now rector of the Grand Mosque of Paris, reacted :

"The Paris court recalled an essential principle of law : the stigmatization of a community cannot be considered as an opinion, but as a crime and an attack on republican principles." [4] 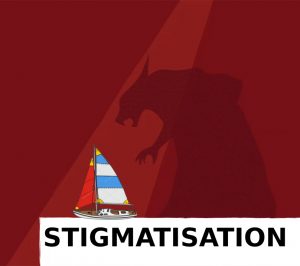 And therein lies the problem.

Today, to form an opinion is to wait for the murmur, the rumor, to see how it evolves and to go in its direction. With social networks, you have to decide in a second what you think about everything ... and especially about nothing. The easiest way is to follow rather than to think. We do not express our preference but the idea we have of the preference of others. The group effect is, once again, rarely of the best brilliance, but so essential to have the impression of having an opinion and to melt into the mass, in two word : to exist.

The yachting in French Polynesia is currently stigmatized, certainly, as others are. It has a duty to set an example, to detach itself from its "black sheep" who do not respect their community and others, to make efforts to show its good faith, to explain itself to those who do not hold it in their hearts... but please, it is also up to each one of us to help it, to try to understand it, to accept that its "black sheep" do not represent the whole community...

By the way, speaking of hearts, some would do well to turn their hatred seven times inside before opening it [5], ... their mouths and/or their hearts.

[2] Study of the awareness of the Polynesian population to boating and boaters (https://voiliers.asso.pf/2021/10/13/plaisanciers-les-mal-aimes-du-tourisme/)