Home ActualitésNews in EnglishRupture of mooring in “Artificial motu” (Raiatea) 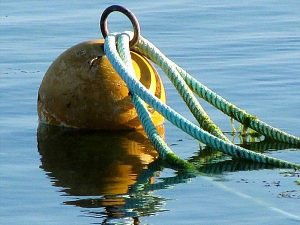 On July 15, the U16 mooring body on the "Motu artificiel" area, managed and rented by the Autonomous Port, broke.
The owner was contacted and taken to the area by the Port Captain of Uturoa. At first sight, there was no major damage, an expertise will certainly be carried out, the sailboat is safe.

As stated in the owner's sea report, "The mooring line, the float, and the U16 buoy are solidly fixed to the bow of the sailboat, as can be seen in the photos taken by the Port Captain". It does not seem then that the incident comes from a bad manipulation of the owner. This deadweight being one of those recently installed in the "Motu Artificiel" area of the Raiatea lagoon by the Port Autonome de Tahiti, it is therefore on the same model as all the others.
What about all the other moorings? The users of these vessels have the right to ask themselves this question.

Moreover, the Port Authority forbids any anchoring in this zone (on the large sandy area between the channel and the barrier) and forces sailboats to take one of their moorings. However, in this zone, there are no residents nearby, there is only sand, so in principle it would not disturb and would not cause any damage. The question is simple: what are the objective reasons for this ban?

It is possible to dock in Uturoa harbor with a dinghy, but this does not depend on the Autonomous Port! Therefore, how can we consider renting out moorings without a pontoon and without garbage dumps?
The recurring question then arises: why is this area under the control of the Autonomous Port and not the municipality of Uturoa, as the latter has been asking for months?

In conclusion, the majority of boaters are quite willing to pay for moorings in suitable areas, but is it utopian to demand secure, insured moorings that offer docking facilities for dinghies with waste disposal?
When you pay, you get service.
None of this sounds like special requirements, it is what is practiced all over the world ...

A matter to be followed very closely.