Home Minutes of AVP meetingsSummary of our 2018 business

Here is a small summary of the activity of the association since the (already distant) AG of March 22, 2018.

We participated in World Oceans Day, which took place at Paofai Park, during which we had the opportunity to meet and make ourselves known by the marine community; Sophie led a workshop around marine knots, teaching visitors how to make toulin apples, among other things.

In June, the association organized an information meeting at the fare buddy of the P.f. on Moorea's new PGEM project, inviting: Heiriti ARAPARI (in charge of the PGEM in Moorea), Franck TAPUTUARAI (assistant tavana), Charly AMARU (nautical brigade mediator). This meeting brought together more than 60 people and was the subject of a strong relay by the local media (press, TV). 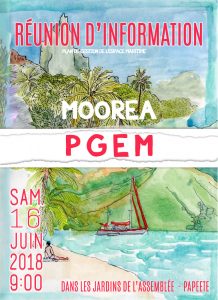 It soon became apparent during the presentation of the project that boaters were hardly invited to come and discuss the issues, and that many areas of uncertainty and uncertainty remain to be clarified regarding in particular the modalities of anchoring sailboats; 5 zones of organized moorings (dead bodies) would be provided, the time frames for installation, maintenance and financial contribution have yet to be defined; anchoring on sand bottoms would no longer be permitted. A maximum of 5 to 10 buoys would be provided for each area and would allow only very limited parking in duration.
The text of this draft, which has not yet been made public, will be submitted to public inquiry in The Town Halls of Moorea at a date that we do not yet know, but to which we are paying full attention. We invite you to come and make your remarks during this survey because this will be the last opportunity to amend the text before the final vote by the Council of Ministers.
An action to distribute leaflets on Taina's sailboats is under way in order to raise awareness of the issues at stake in the PGEM as possible. The full report is available on our website.

Following this meeting, Arnaud JORDAN and Franck TAPUTUARAI met in July in Moorea. The two men have known each other for a long time and the discussion is frank and open. The president of the AVP had the opportunity to defend the point of view of the sailboats and felt that he was being heard at least by this member of the city council. It had been decided to have an information meeting on the PGEM, but in Moorea, this time. It was postponed sine die. However, it remains on the agenda. Finally Franck was invited to visit a sailboat during the Cook Channel regatta, organized by the Yacht Club of Tahiti. Again, this was not possible...

A few members of the AVP met in Moorea, still on the theme of the PGEM. A lot of outreach work remains to be done. We try to find volunteers for a festive day...

Some expenses were incurred for the construction and printing of a banner with the AVP logo. The nautical fleas of Arue that we wanted to join could not take place and we are studying an option in Taina. We are organising Water fleas on November 11, 2018 at the Marina Taina.

We looked at the customs texts to meet the request of a boater who had acquired in Nouméa, a sailboat that was popeized in 2009 and who wished to settle in Polynesia.

Question: Should the import tax be repaid or not?

The association to function properly needs active volunteers, as the board members are also boaters and like to throw their bows to other islands which results in leaving the work to the remaining board members. So we appeal to all the people who want to help us on an ad hoc or more regular basis. Note the resignation of the vice-president for personal reasons, which reduces our team of volunteers.

We are open to your proposals and ideas, so don't hesitate to pass them on to us.