Following this article in the press on September 11, 2017:

PAPEETE, September 11, 2017 - At the end of August, a TNAD representative accompanied by a bailiff carried out a situation report at the Taina Marina. They listed the number of boats anchored on the area between the channel and the land and between the marina and the bungalows of the Intercontinental Hotel. They asked the owners to move their boat as soon as possible.

the Autonomous Port, delegate of the area, had been contacted. Boats can anchor east of the channel "until further notice"

By press, TNTV this time, the association learns from the mouth of the president of the government that sailboats are no longer welcome in this area. "The autonomous port, with the means at its disposal, will take drastic measures for the evacuation, little by little, of the sailboats of this area" tells us Édouard FRITSCH.

We will see, as elsewhere, a privatization of public space. It is nevertheless paradoxical to see that this area will be, according to the TNAD projects, partially backfilled, that the marina could be extended to the east which in both cases means the total death of corals and current marine life while the government r to the boats their pollution, not to throw their black and grey waters out of the lagoon? When we see what a river carries, the amounts of mud that flow every day on corals, wild or authorized embankments, it must be remembered that pollution of the sea, and of the lagoon in particular, is very largely caused by life on land.

It is very sad to see that these free mooring areas are not preserved by the authorities. This buffer zone, tolerated by the Marina Taina and the autonomous port, allowed to find shelter for a few days. Moreover, no responsible sailor would stay at anchor for too long because it requires daily monitoring: a mooring does not withstand a wind rollover, unlike a much safer dead body.

There are three types of boats on this anchorage:

The government has opened the doors to the boating economy: 1.5 billion injected into the economy each year, extending the right of stay to 36 months instead of one year before 2014.

The government has lowered the amount of the import tax on boats (every person who wants to leave his boat on the territory for more than 36 months must pay a "Papeetisation" tax which was about 30% of the value of the boat before 2014 and that is 7% Today. There is therefore no question of exemption as TNTV mentions.

The government has therefore agreed to pocket the taxes of the navigators, now takes advantage of the financial windfall generated by this economic activity, but has done nothing since 2014 to develop infrastructure to accommodate all these ships. Today, nearly 600 boats stop in Polynesia and 4/5ths leave in the same year. The autonomous port invests billions each year to develop infrastructure to receive cruise ships that are a real source of pollution and which they pay no tax to the territory (it must be known) but no project concerning Boaters. Today, the mooring is saturated, largely because there is no more space available, nor dead bodies in the Taina marina.

Sailboats have no choice but to put themselves in the only available place, is some are besides Polynesian residents, work and in addition to having paid a heavy import tax they contribute like all land residents by paying taxes.

Not only has the government developed no infrastructure to accommodate but on the contrary, it closes to boating islands, like Bora Bora recently and perhaps others soon. You can't demand money from the people and drive it out when they've paid... 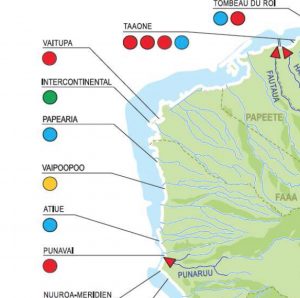 The so-called pollution generated by sailboats is a decoy that makes it possible to stigmatize this population. It is often because they have a complete lack of knowledge of the reality of life for boaters who have a real ecological sensitivity to the environment in which they live and that they respect more than anyone else. There is no pollution and I have proof of this the samples that are taken regularly and which allowed the Marina Taina to obtain a Blue Flag, just like the beaches of Bora Bora! This is the reality of the analyses done in a concentration of more than 300 boats.
In New Caledonia they are investing in a marina that will accommodate 900 boats! Because they understood the economic interest of boating.

You can access the quality of bathing waters and you can see that the area of the marina which includes the points "Papearia" and "Intercontinental" and which concentrates the largest number of boats are respectively BLEU and VERT.