41 people, including the full Office 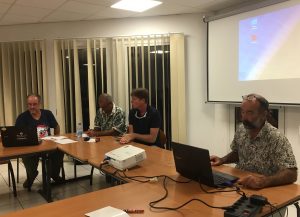 The Office has carried out the following actions:

Meeting with the President of the Maritime Cluster (Gérard SIU)

This meeting was very disappointing: the Cluster seems for the moment to consider Archipelagoes as the only interlocutor in terms of pleasure, whether professional or amateur. Moreover, the image of sailboats in the mind of Mr SIU is like that of a truncated...

The PAP manages the lagoon to the Tapuna Pass, and the Taina Marina, as well as its organized mooring area.

Anchoring in front of the airport is prohibited at night.
There is a government will to close the fairground mooring in Taina; THE PAP could install additional mooring areas, but obviously pay. Several restricted areas are envisaged near Papeete (bay north of the Intercontinental, airport control tower, Technimarine...), but also further as in Mahina.
Crossing the runway lines: the procedure is poorly followed. The AVP has proposed to establish a standard procedure and disseminate it. The Port Vigie is very favourable, but it is the commander of the port who ultimately decides.
Local news is likely to slow down these discussions ...

Note: France has delegated the management of the lagoon to Polynesia (autonomy status of 2004); however, there remains a broad uncertainty around the respective responsibilities of the various administrations in charge of the maritime domain (DPAM, DIREN, Fisheries, Planning, etc.).

Possible meeting with the Government

We plan to meet with members of the Government. To do this, we need more legitimacy (in other words, more members: see next).
The Government takes sailboats for polluters, and that do not move (sucker sailboats). We know that most of the pollution comes from the land, but it's going to be hard to get recognized despite many studies: sailboats are associated with "poo" in the water!
So we need a more positive discourse in this area.
It is summarily estimated that an additional 450 sailboats are present in Polynesia as a result of the temporary admission increased to 36 months. It can create an embarrassment, a "visual pollution" in the words of some. The feeling of a part of the population is not good ("the sailboats pay nothing, no taxes, and clutter the lagoons ... ») ; hence the interest of trying to meet with the Minister of Equipment for which this is the area of responsibility.

This is a difficult project that is of great concern to the members of the Board.
The public inquiry has been ongoing since 25 February.
Working and think-tank groups are being provided shortly to define the general position of the AVP, and to prepare a standard commentary that can be used as a blueprint for the observations you will record in the official registers: interested members are interested to register at the end of this AG.
(see below for more)

It is planned to meet with the JRCC, with the idea of a standard procedure to be disseminated for cases of cyclone warning, tsunami or research/anxiety.

A big thank you to Eric who developed the new site, and works a lot to recruit partners.
The purpose of the partnership:

Examples:
Vincent Roche (Maintenance Marquises Services) in Hiva Oa (85% of arriving sailboats pass here) will make a room available to AVP members;
Matthieu (Pakokota Yacht Services), who sees 65% of the sailboats passing through Fakarava at its moorings...
Michel Balzer in Taina, which remains a must for passing sailboats, etc. ...
All these partner-representatives will be able to create membership, live: the membership fee is "refunded" in 20,000 XPF purchases ... 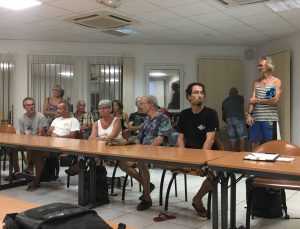 Composition of the office
Sophie Deriols, who resigned and whose work in the protests is being thanked here, is replaced by Nathalie Garnier.
The members of the board are:
- Arnaud Jordan (President)
- Eric Pinel-Peschardiere (Vice-President)
- Regina Rehel (Treasurer)
- Nathalie Garnier (Assistant Treasurer)
- Florent Gachod (Secretary)
- Bernard Guillou (Assistant Secretary)
The new Office was unanimously elected.
Quitus is given to the President for his 2018 management.
The association's statutes are also unanimously approved.

The rule is: it is forbidden to wet anywhere except in the permitted areas: the 48-hour mooring permit is lost on sand.
The number of sailboats is strictly limited by area, and the town hall (via the office of a standing committee) will decide every year how many boats it accepts (it has already announced in writing that it wants to further reduce the quotas of authorized moorings ...).
The public inquiry is very important, the investigating commissioner having to submit a report taking into account the comments of the public (so, you ...).
If the public inquiry does not lead to any changes in the text presented, there are elements that seem "attackable" in the file, with some of the most obvious:

Marina Taina
The fairground mooring will certainly become organized; the question of its exact sizing remains, as well as the development of complementary zones.

Bora Bora
We need an AVP representative in Bora Bora.
A request for 2 additional shallower mooring areas is underway.
Strategy against recent media "attacks" against boating
The Office is in favour of avoiding direct or aggressive frontal responses as much as possible, and seeking consultation before considering other means of action.

Water chips at the Marina d'Arue: no date at the moment.

Clean-Up day at the Yacht Club in Arue on Saturday, June 22, 2019:
Open to all: cleaning of waste in the lagoon of Arue, motu area; in partnership with the diving club, the Yacht Club of Tahiti, the sailing school of Arue, the canoe club and all the players in the area.

World Oceans Day, Paofai Park, early June, 12-5:00 p.m. (upcoming date, Saturday):
Village of associations, fun activities (seamanship workshop, ...), communication around the preservation of the oceans (waste management and use of "lagoon-frienly" products, ...); communication with the public on the eco-responsible lifestyle of boaters; 3/4 or more volunteers, sought to run the booth (animation and/or communication).

A regular potluck or barbecue seems very difficult due to a lack of suitable location.
Organization of hikes: volunteer members to organize (courses, public transport or carpooling, registrations and planning, etc. ...) are highly sought after.
Heritage Day, at the Museum of Tahiti and the Islands, in mid-September: festive event around Polynesian heritage.
Project to be developed: in 2018, cancelled due to lack of volunteers to supervise the event. Proposals: workshops (seamanship, modelling sailboats, preparations of homemade ecological products, canned goods... other ideas?), modelling of sailing, boat visits?, sky observation/aerology; stargazing (if evening festivities)
Needs: at least 5 volunteers to work on the project initially.

Waste Composter, at Arue Marina
Project at the initiative of Emeline (from the Taina marina) but which seems difficult to set up on this site at first; proposed installation of a composting device at the Arue marina on a smaller scale to assess the feasibility of the project. Proposal to purchase a wooden composter made by students at Puna'auia Vocational High School; Cost: 7000 XPF. Communication to users of marinas: compostable, non-compostable in Polynesia.

Polynesian Children's Initiative:
we are looking to develop actions of the type carried out by the catamaran Contretemps aux Marquises: see their page on the AVP website.
Create a link with the population, for example by taking children on board and showing them the reality of the boat. Next initiative with Moorea fruit juice plant, and Moorea children.
The associations need volunteers, the 6 members of the Office really can not do everything: do not hesitate to report by email if one of the job offers above interests you..... 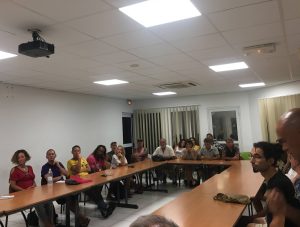 - Problems with a few passing sailboats: for example, in the Marquesas with the theft of fruit in the gardens; in Fakarava with wild garbage depots...
The idea of making a charter displayed is good, but can be double-edged: it is shown that some sailboats behave badly, even if the AVP dissociates itself from these people. Ditto for shipwrecks or near-wrecks.
- Negative image of sailboats pooping in the water: what to do?
Insist to the relevant authorities on the requirement of a blackwater crate, and onshore treatment facilities.
- Payment of membership by boat or per person?
To date, it is per person

End of the General Assembly, followed by a pot offered to participants