Following the publication of a post on a social network page (in fr) and its resumption in an article of radio1.pf (in fr) concerning the passage of sailboats in the axis of the airport runway without authorization. 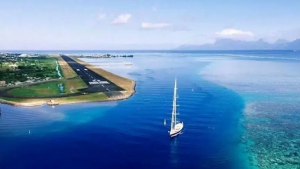 Just in the title of the article, we already feel the stigma. "These sailboats which cut the axis of the airport without authorization" ... WITHOUT AUTHORIZATION.

Yes, there are surely sailboats that do it without authorization. It is a fact. But from there to make a generalization, there is only one step ... once again quickly crossed. The title leaves little doubt: ALL sailboats would do it without asking anyone.

And what about common sense?
Obviously still a long way from the necessary reflection.

Precisely, the A.V.P. was about to publish a reflection on the stigmatization of a community. The opportunity making the thief, the article was put on line of the blow (in eng). This example of the article of Radio1.pf and especially of the page of a social network from which it comes for a great majority illustrates wonderfully the reflection that we propose around the stigmatization of a community, in the broad sense.

Indeed, in no case the A.V.P. seeks to endorse or excuse this kind of behavior: passing the airport axis without having asked for permission. Obviously, there are some who do it ... but there again, is it necessary to generalize? Unless you want to discredit a community.

Moreover, in the comments following the post, someone rightly remarks that the picture was taken from a drone or helicopter ... right in the axis of the runway! Answer: Oh yes, but he has an authorization of course !
If we do not border on bad faith then it must be.

Doesn't anyone do certain rides on trail track without the authorizations?
Everybody is allowed to drive more than 90km/h on the RDO?
Nobody fishes at night in the PGEM areas of Moorea?

Yes, some citizens do not respect the rules. Should we stigmatize the whole community they come from?
Please make a distinction.
It's easy to always talk about planes, trains or buses arriving late... for how many arrive on time?

In this specific example of the crossing of the airport axis, the A.V.P. had set up a procedure (September 2019) (in eng), which would be the only one proposed at the moment. It would have been validated by the Port's watchtower ... orally.
The A.V.P. puts things in place and spreads them. Like everyone else, the A.V.P. does not stand behind each sailboat to verify the proper implementation of the established rules. It's up to everyone to respect the rules ... and to use common sense.